Sponsored Chapter
Brought to you by: James L
Thank you! 🙂

I took a carriage from Tetra on my way to the next town.
It was such fine weather that I couldn’t help but to feel sleepy.

[Oy sonny, yawning so carefreedy… can you properly escort us that way? ]
[Ah, sorry]

Instead of being a passenger, this time I was the escort. It’s not for free, of course: I’ll be paid 3 silver for the trouble. All I needed to do was to ensure that this middle aged peddler and the cargo to arrive safely to their destination.

I could easily handle it if it’s just a thief or ordinary monsters. However, if it’s a leader-type monster, the peddler would have no choice but to escape and abandon the cargo.

[By the way sonny, are you truly strong? ‘Cause you don’t seem to be.]
[I can fight alright. At the very least, up to the level of a rookie Holy Knight.]

At that point, the peddler began to laugh. That was quite dangerous, since the horses became surprised due to the sudden pull on their reins.

[Oi oi, that’s quite an exaggeration. Equal to a Holy Knight! I don’t mean badly, but you shouldn’t spout that out in the next town, even if it’s just a joke.]

[Because once we arrive at the next town, it will be the Holy Knights’ territory. Of course, if your blathering was heard by a Holy Knight, we’ll definitely get beheaded for being disrespectful]

The 2 of us getting beheaded. That thought sent chill up my spine. I’ll never again say anything about the Holy Knights openly.
Because this time, I planned to stay for a bit and get some rest. I wasn’t able to do so back at Tetra due to the monster subjugation on my hometown.
Then Greed spoke to me through 《Mind Reading》 skill.

『Isn’t that fine, since you can try your hand at fighting a Holy Knight? Afterwards, you can sleep with your tummy full. Am I right?』
[I won’t be able to even sleep if I do that, all the soldiers on the town will be chasing after me]
『You need to think big, Fate. If that’s the case, then you could just take over the town. That way, you can sleep well since the town is under your rule. Am I right?』
[That’s YOUR idea of having a nice and good sleep, not mine…]

While hearing that crazy idea from Greed, the carriage suddenly halted.
Ee? What’s the matter?
A young girl could be seen standing there, blocking the road. A dark skinned girl.
Yup, she was the Gallian I saw back at the Heart clan residence. She had an impressive white tattoo etched on her body and wielded a huge black axe that betrayed her small physique.
While keeping a cool face, she continued to block the road. Unable to endure anymore, the peddler asked,

[Hey little lady. Can you move away?]
[Nope. But, if I can tag along, I will]
[…u-understood. Then get in. You have a childlike face, but your heart definitely isn’t one of a child’s.]

Was this because this peddler had been travelling for years already? He easily let a Gallian girl hitch a ride on his carriage. While watching the two talk, I sent eye signal to the peddler so I would not interfere with the conversation. What’s the point of me escorting if it’s like this? However, it’s what the client wanted, regardless of what I felt.

Well, normally I would be scared shitless if I saw her being able to lift such a huge axe one-handed. This girl, she had the kind of aura that I couldn’t put my finger on, but she definitely knew her way around with the axe.

It’s like she was threatening without saying a word. However, if we could solve this peacefully without fighting, it would be alright, and the peddler seemed to be okay with it. Just a matter of adding more cargo onto the load, it’s that kind of situation.

The Gallian girl loaded her axe first into the the carriage.

The carriage lurched to one side due to the heaviness of the axe.
Panicking, the peddler protested.

[The wagon might break. Please unload it!]
[ Ahh, I see. Sloth, return to your original weight]

Once the Gallian girl patted the axe, the carriage became balanced once more. Perhaps she did something that greatly reduced the axe’s weight.

That’s a relief. I thought the carriage was about to break.
The Gallian girl sat next to me afterward. 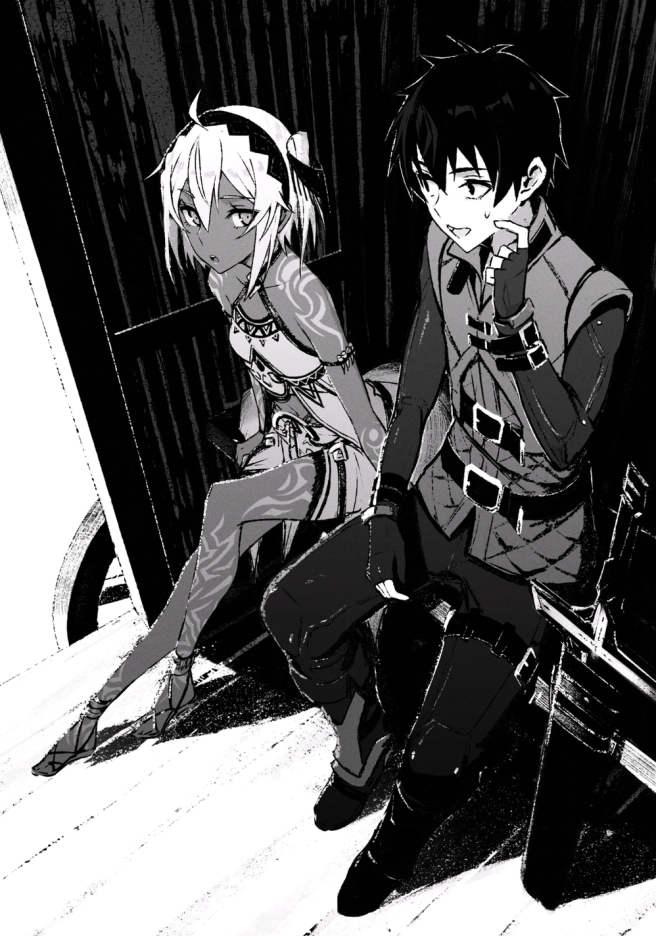 Rather than meeting, it’s more appropriate to say that you’ve ambushed us.
Seeing through what I thought, she said,

[My name is Myne. I thought it was about time to head to Gallia. Now, I haven’t heard your name yet. Tell me?] (TL Note: It could be translated “Mine”, but I and Xaga found it weird so we use Myne instead)

What the hell, I felt extremely annoyed although she said that with a soft tone….
Perhaps, Myne’s eyesーーthose red eyes might have something to do with it.
Those eyes looked very much like when my eyes became red due to being in the state of starvation.

[You heard me, right? Tell me]
[Fate Graphite]
[…I remember now. Fate the Glutton, right?]

Eh!??? I haven’t told you anything about gluttony yet.
Myne then started whispering to me so that the peddler couldn’t hear her.

[I’m also an owner of a Deadly Sins skill, so naturally, I could tell. Fate’s skill hasn’t matured yet, so you couldn’t tell]
[Is that so… then, you are?]
[ I am the owner of the [Wrath] skill. Similar to you. Well, hasn’t Greed told you about it?]

Myne tilted her head, giving Greed a glance.
Un, I hadn’t heard anything. Because he won’t say anything about it.

Even if I asked Greed, he won’t respond. He simply feigned sleeping.

Deadly Sins skills….also the [Wrath] skill… Is it similar to my [Gluttony] skill? I wanted to know more from Myne, but the Peddler could disturb us at any moment.

Talking any further now might not be a good idea.
To me, who unbearably anxious, Myne said,

[You’ll understand in the future. Because, Fate has borrowed something from me. I’ll stay with you until you return it to me]

Borrowed? Could it be that time with the kobolds at the Heart clan territory? Perhaps she considered giving up the kobolds to me as some kind of a loan.
I was basically forced into the kobold hunting, since Myne would’ve leveled the entire mountain otherwise. Even so, it was certainly a great deal.
However I had something else to do now.

[That’s a problem. I have to go to Gallia]
[I know that. I’m heading toward the same direction, so that’s fine. Then you can help me out along the way]

Although she said it that way, her eyes told me that [I have to] instead.
We were heading to the same direction, and there are things I wanted to know, so I guess it’s fine.

After saying so, Myne fell asleep next to me. That was fast.
Aah, so this is what Greed meant by ‘a first class warrior can rest at any given time.’ If that’s true, then Myne should be a first class warrior. Moreover, the owner of [Wrath] skill…I wonder how she fights?

From the lovely sleeping face, she didn’t seem like a girl who could fight.

Seeing that our conversation was over, the peddler finally called out.

[The little lady seems to be asleep. Anyways, are you two acquaintances? If so, then just say so]
[ We can’t even be considered acquaintanced. I only met her once before, I barely know anything about her.]
[Even so, she was quite friendly to you. Tha pretty much confused me. I guess I’m already too old for this….]

The carriage proceed forward without meeting any monsters. It was too peaceful, making me think that something was bound to happen.

[Aah, we can see it now. The capital of the Holy Knights]

The outside was as solidly protected as the royal capital.
The capital Alcazar was surrounded by high white walls, as if reflecting the characteristics of the holy knights who governed it.