Sponsored Chapter
Brought to you by: Teemu Salminen
Thank you! 🙂

Err, what should I do now? I was being stared at by those warriors group. And with the desert heat still burning behind my back.
To be frank, for causing this situation alone, I could be considered as a monster already.
I was sweating cold sweat underneath my skull mask.

When I was just about to say something, the group leader unexpectedly bloomed a huge smile on his face.

「This is huge. I’ve never seen any other warrior who can do something like this。You guys are thinking the same too, right?」

Influenced by the group leader, the other warriors simply nodded.
Afterward, they began chirping all around me.

「He looks suspicious since he’s wearing that skull mask, but who cares about appearances anyways?」
「Thank you for saving me a little while ago」
「What kind of weapon is that black sword. Can you show me?」

I watched as the ridiculous situation unfolded. When I was with Roxy, all the warriors we had come across were always up to no good, so I was conditioned to be on guard around them.

In contrast, these guys actually cherish their partners, even to the point of worrying about me, charging back here without regard to the risk of dying.

The leader offered me a handshake.

「I am Baldo, the leader of this party. May I know your name?」

Because my real identity was concealed behind the skull mask, I replied with my predetermined alias.

「It’s Mukuro. What about the injured people in you party?」
「Yeah, thanks to you their lives are in no danger. They all have successfully returned back to the city. They should recover after receiving some treatments.」
「I see……」

That’s good to hear.
Well then, what shall we do with this sand golem’s core? If I bring it back to the city, it’ll surely be converted into a large sum of money. Travelling funds will be improved by a notch. As I have to cover Myne’s travel expenses too, I could use some extra income.

I’ve already exposed myself to the crowd as Mukuro now, there was no turning back.
I replaced Greed back to his sheath, and tried to lift the core. It was almost as tall as myself. And since it’s really heavy, lifting it normally will cause your feet to sink in the sand.

I could lift it without any difficulty, but it messed with my footing so bad. I would sink up to my knees on every step I took.
The surrounding warriors couldn’t stand watching me, thus offering their hands.

Vigorous and hoarse voices resounded throughout the desert. As soon as everyone also supported the core, the weight lessened by a lot, and I was able to free myself from the sand.

「Thanks」
「You were the one who helped us out. We can only do this much.」

From there, while cheering and shouting along the way, we headed back to the city. This was kinda nice.

We managed to reach the city lodging facility before daybreak. If I did it myself, I think I’ll still be buried knee-deep in the sand right now.
Such is teamwork.

Once we entered the lodging facility, employees came running all at once.
The core we had brought in caused a major fuss. Among those crowd, the employee responsible for handling this bowed to us and guided everyone to the cashier.

「No〜、could it be……that sand golem is finally defeated, this is truly a delightful day」

Sand golemーーa crown tier monster with a proper title. Long story short, it was the big boss of the monsters dwelling in the desert. Just to defeat this sand golem, it was said that this city’s holy knights had fought it for years to no avail.
Because, after a while, it always escaped into the sand.
It seemed that this repetition had been ongoing for the past 100 years.

As I was told, the sand golem was really fleet footed in term of escaping. It disappeared into the sand when it’s about to be defeated. Perhaps that’s how it evaded the holy knights for all those hundred years.

Well on my part, if I didn’t use the secret art of Greed’s first form, I would’ve also ended up stomping my feet on the sand while shouting “Godammit”.

It was also a big fuss at the cashier. A lot of people gathered around, making a scene, and perhaps the best time to promote Mukuro the warrior. Since I had defeated the greatest enemy of this territory, people will still think of Mukuro on favorable term despite me always wearing mask. Some of them still glared at me curiously, but there is nothing to be worried about.

The cash will be delivered on later date due to the time required to prepare such a large sum.

「Pardon me。But we never expected the sand golem will be defeated by a non-holy knight…… And due to that, we’ll have to negotiate the reward amount with the top management. Until then, please have a good rest today」
「I understand. Then, I’ll just get some sleep 」

I thanked the warriors who had previously helped me.
Afterward, they decided to have some drinks at the bar.

「How about you? Taking a swig after a good fight is always nice. Besides, you can tell us how you defeated that sand golem」

The offer for a drink was tempting. But, it’s impossible to tell them how I actually defeated the sand golem. Otherwise, I’d be revealing myself as an amateur, since all I did was rely on Greed’s ability.
I’m pretty sure that all the warriors here were seasoned veterans. Because I didn’t want to disappoint them too much, I refused courteously.

「I see, that’s too bad. We are going to hunt for sandmen for quite a long while in this city. If you need anything, just patch us through. You hear us,Mukuro！」
「Haha, later」

As for me, I headed back to my rented room at the third floor. I checked back if there was anyone following me. I checked in with my real face after all. It may be excessive, but there was no wrong in being cautious.

Because there were as many as 500 rooms in each floor, I couldn’t tell exactly which one was my room. From here and all the way there, all of them look the same.
The amazed Greed hurriedly told me..

『The fourteenth room from here, that is our room』
「Greed has a surprisingly good memory」
『It’s not really surprising. I’m an inorganic being. My body structure differs from that of a human.』

These inorganic beings were amazing. While having that thought, I unlocked the door and entered.
Finally some rest…..

On one of the two beds, the still painted-with-cat-whisker Myne was still sleeping. It seemed that she hadn’t noticed my naughty scribbling yet.

I’ll have some sleep now. I’m tired. After placing Greed against the wall, I removed the skull mask.

Drowsiness immediately attacked me once I hit the bed. Terribly sleepy… Even if later Myne scribbled on my face to get back at me, I’m too sleepy to get up. My vision quickly faded to black.

What the….sound of water, I was woken up by sound of water flowing. Myne was nowhere to be found when I looked around the room while yawning.

After the sound of water finally stopped, Myne, only in undergarments, stepped out of the bathroom!?

「What the hell,why are you dressed like that!」
「It’s not embarrassing if a child like Fate sees me this way」 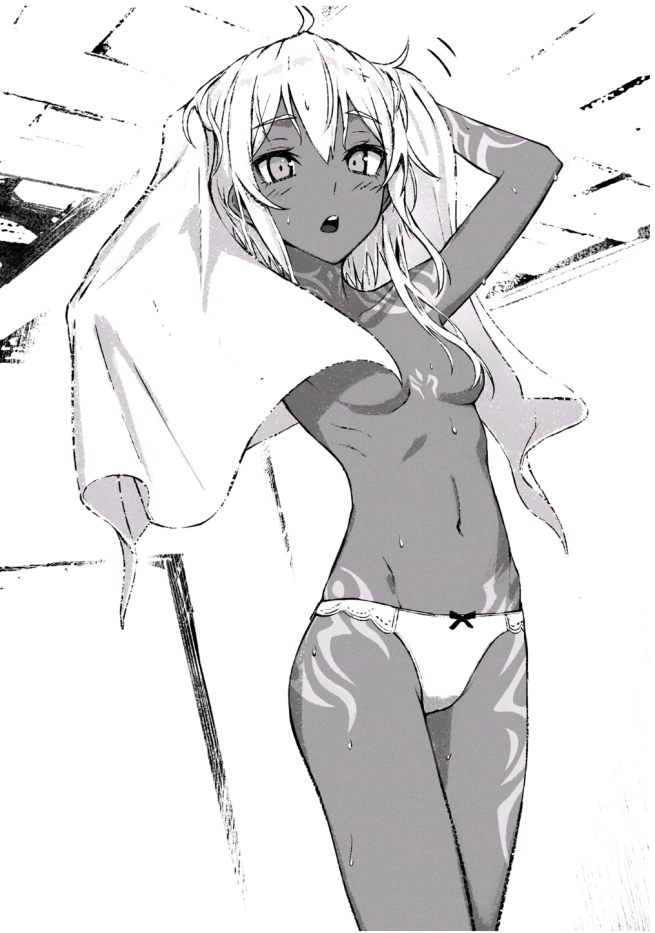 Your appearance looks younger than me, you know?
Nn? It’s not all that visible when she’s fully clothed, but her tattoo actually encompassed her breast and stomach area. And I could see it up to her back when she turned around…. It’s almost a full body tattoo. Only her face was not covered in it.

When our eyes met, she laughed cheerfully.

「That little mischief you did……it’s quite hard to wash, ya know」
「!? That’s something I did in the spur of moment……sorry」
「Originally, I considered to throw Fate outside while you are still sleeping. But then, I’d be in trouble if you are hurt. So,it’s like this」

Myne, still only in her undergarments, handed me a hand mirror. I had trouble deciding where to put my eyes on.

What reflected on the mirror was like a primitive man’s face. A connected pair of thick eyebrows, beard drawn around my mouth, attached to sideburns.
Also, a huge “Glutton” was written on my forehead…. This was cruel. Even without mind reading skill, I can imagine that Greed was laughing hard there on the wall.

Myne’s red eyes told me to just suck it up.

「Fine, I get it. I was wrong. Therefore, please put on some clothes」

Although Myne didn’t look to me like an adult, I couldn’t help but still bothered by the view. I was at that age after all!
I quickly made my escape to the bathroom. Washing the so called masterpiece Myne had scribbled on my face. It’s actually drawn fairly well, no no…it must be washed away…
As expected of the [Wrath] skill owner. This was like 10, no 20 times the amount of retribution.
I’ll remember this well since I’ll be travelling with Myne in the future.

Raizu’s Note:
Please consider to donate so I can treat myself and my editors for some coffee and snacks to deliver more chapters for you. 🙂