Sponsored Chapter
Brought to you by: Michel Wolking
Thank you! 🙂

That machine angel Haniel, she had the same red eyes as Myne, and was similar to when I was in starving state.

I don’t want to think like this, but I felt like there was something that connected us.

At the same time I said that, Haniel’s core stared at me.

I was immediately attacked by immense pressure, that it’s hard for me to breathe.

This is… this is the same as me. When both of my eyes turned red, I’m able to frighten anyone I stare at as long as they have lower stats than me.

Of course, Haniel does have much higher stats than I do.

Greed then said through the《Mind Reading》

『Move your eyes away. If you keep looking at her eyes, you’ll be frightened and rendered unable to even fight.』

Damn, I never thought the day will come when I had to look away from my opponent.

So what should I do? I can’t fight properly if I stare at the core’s eyes.

This is really bad…….it’s embarrassing to let Myne see me in this condition.

[Don’t fall over just from such thing. Man up.]

I tried looking at Haniel’s core once more. Yeah, I immediately felt my body stiffened….

Really, what should I do?

The enemy didn’t feel like waiting though. It immediately started attacking with its six limbs.

[It can’t be helped. Fate attack its leg until you can get used to the pressure. I’ll handle the more troublesome core. However, the deciding blow has to be done by the Gluttony skill owner.]

[Could it be, that deciding blow….as I thought.]

[Yes, you’ll have to attack the core.]

Of course. We need to destroy its core to properly defeat it.

However, there was that girl in the core. It’ll be hard for me to cut her down,

[That thing is no longer human. It’s a monster disguised as human. Don’t get fooled by its appearance.]

Haniel’s core moved its hands and created bluish fire balls. Circling itself with it.

Them it pounded the ring of flame into the ground. The devastating heat caused the ground who came in contact with it to turn into lava.

An indirect magical attack. This is bad, even if I switched to scythe form, I won’t be able to dispel it.

I could only looked at the red wall heading toward me like tsunami, waiting for Myne to solve this.

Because the core had human form, I couldn’t get myself to feel worked up. It was trying to kill us. But even so, I didn’t know if I could muster up enough courage to face it.

There was no choice. I switched to black bow form, and ready myself to sacrifice some stats.

While I was thinking about that, Myne moved forward and swung her black axe.

[Get behind me. Fate cover with magic arrow. When you’re ready, we’ll attack together. Alright?]

[O-okay, roger that. But, how will you stop that?]

The shout sounded pretty, but the swinging of the black axe was intense.

The impact blew back the approaching wall of lava back. So strong that it was enough to reach Haniel and make it fall on its knees.

Myne approached Haniel, and swung at its right arm.

The core cried in pain. Blood trickled out of its red eyes.

Again, I accidentally looked into the core’s eyes. I quickly turned away and get moving.

I’m tasked with duty of restricting Haniel’s movement. So that Myne can attack effectively.

Since that’s the case, the magic I needed to imbue into the magic arrow is obvious.

I drew the black bow, and knocked the magic arrow. Then imbued it with Dust magic. Producing a petrifying magic arrow.

Even the crown tier monster like Lich Lord was turned to stone by it. Now that my stats are higher than before, I should be able to petrify some parts of the machine angel.

I aimed at tone of Haniel’s feet, and release the magic arrow.

The core was writhing in pain. Even if it tried to forcefully stand up, its body was like attached to the ground.

Oioi, is that even possible? I’ll just shoot it again with more petrification arrows.

The petrified leg was returning to its original state at a visible rate. What is that? Some kind of recovery ability? The level was way too high compared to my Auto Recovery.

Not just the foot. The arm that Myne had cut off is also growing back at visible pace.

[What the hell with this recovery ability]

『It’s a military biological weapon. It’s designed to fight alone on unspecified duration. That level of damage will only get recovered immediately. You’ll have to continue restricting it until Myne is able to strike a fatal blow. After that, you’ll have to deliver the finishing attack.』

This was a huge responsibility. If I’m late even a little bit, the Haniel would just recover and we’d have to start all over again.

No matter how strong Myne was, I can’t simply rely on her alone, it’ll just hinder her.

I had to do this properly.

But before that, I needed to create an opening for her. I shot another petrification arrow.

This should stop the troublesome creature a little.

As long as its movement was restricted, it’s good for Myne to go. She cut away at the growing arm again and also the other arm. Her axe seemed to grow stronger with each blow.

I asked for Greed’s thought while supporting Myne with petrification arrows.

[Is Myne’s black axe power goes up every time she attacks with it?]

『Well, you can say it that way. The attack power rises as you attack. But the weight also increases. In other words, although it doesn’t have upper ceiling in term of attack power, it also gets harder to wield it overtime.』

[oh, so that’s why…..that’s why the ground collapsed when Myne put the axe down.]

If the attack power increment from fighting the orcs was maintained, then the black axe will have a tremendous weight right now. It’s evident from how each of Myne’s step created a deep cavity on the ground.

『That weapon――Sloth has great destructive power, but it greatly hampered its wielder’s agility in return due to its progressively increasing weight.』

[But the way I see it now, Myne’s speed isn’t slowing down yet.]

『No, she’s gradually slowing down. Why do you think she asked you to restrict Haniel in the first place?』

Unn, it’s only a little, but she does get slowed down now.

Meanwhile, Myne managed to blow away Haniel’s head with the black axe.

The core’s cries became even louder. Its face was drenched in blood.

I couldn’t look directly into its eyes since it frightens me, as if those eyes naturally shoot out fear out of it.

Suddenly the air around us changed. What the!? What’s with this unpleasant pressure!?

『Chi, this is bad. We’ll have to defeat it as soon as possible, it has reached its adulthood. Fate, be careful!』

Myne who had been fighting Haniel jumped away in retreat.

She landed next to me. The weight of the axe caused the ground to unexpectedly dented. Making me to lose balance in the aftermath.

[Fate, behind me. An attack stronger than before is incoming.]

Apparently, the adult Haniel thought that it had gained enough power to wipe us out.

Myne knew this, to the point she retreated from the fight to cover for me.

To be honest, I feel both thankful and miserable at the the same time. This way, can it still be called working together anymore?

I can’t say that for sure.

Then, what if I have the power to fight it head on? Hmm~…. I can only try.

[Greed, do you think it will be enough if I do that?]

『I knew you’ll say that. However, never forget to not push yourself too hard. It’s quite a different matter going over there by yourself. You’ll get swallowed if you went too far. Never forget that.』

[Yeah, I understand. I’ll show you that I won’t get swallowed by the Gluttony skill since I’ve come this far.]

Come! I called upon the Gluttony skill.

Usually, I devoted myself to suppress the hunger of Gluttony skill at bay. But this time, it’s the other way around.

In order to fight Haniel on an even ground, I had to unleash the gluttony skill starving state. In order to gain that physical abilities boost, I dared myself to invoke the hungry beast within me.

I felt and unknown thing wandered inside my body. Then, I started to feel the hunger for souls in a blink of an eye.

……..this gradual sharpening of body sensation.

Do not step past this limit. Suppress the gluttony skill to not cross that line…….yosh, it’s done.

Myne was surprised upon seeing what I did.

[That reddened right eye. To control half of the Gluttony skill through sheer will alone….that much after such a short period.]

[Even I have to step up sometimes. I don’t want Myne to treat me like a child forever.]

[Ooh, how reliable. Fine, I’ll consider you as an adult if we won this battle.]

At this point, I can only control the Gluttony skill’s hunger for a limited time. We’ll have to defeat Haniel before my mind broke down, and I had to consume its soul since I’ll definitely get swallowed by the skill otherwise. This was something I shouldn’t do unless I’m very sure that I can defeat the enemy with it.

The risk was high, but it’s necessary to even out the match. Regardless, since I’m the owner of the Gluttony skill, I’ll eventually have to make use of it anyways.

This is a power you can’t trust. I’ll keep looking for the best way to coexist with it. One of the answer is to learn how to draw out its power when needed.

I stared at the adult Haniel’s red eyes. There was no fear or pressure this time around.

Thanks to semi-starving state, I was able to negate Haniel’s pressure. This way I could fight at the front line along side Myne.

I drew out the black sword, and brandished it toward the four winged Haniel. Even now, the core was still shedding tears of blood. 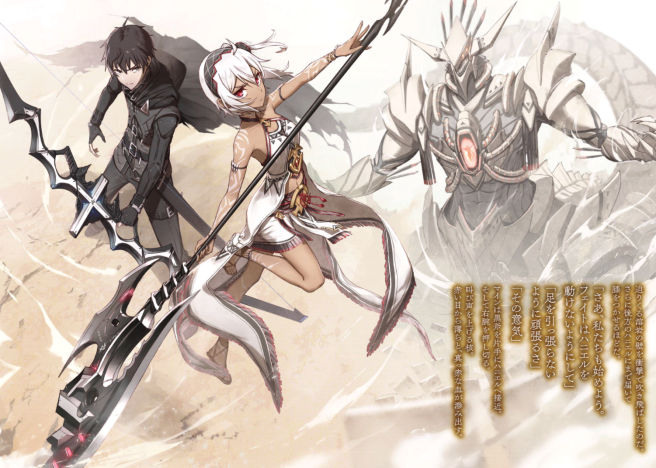